WestJet has joined Air Canada and Air Transat in allowing flight attendants to wear medical-grade gloves as protection against Ebola.

“We are going to provide medical-grade gloves for our flight attendants who wish to wear them,” a WestJet spokesman said via email on Friday.

Air Canada announced it had approved use of gloves by its flight attendants on Thursday. United Airlines and Frontier Airlines in the U.S. have agreed to similar provisions.

The fear over spread of Ebola is driven by the case of the Texas nurse who flew on a commercial U.S. flight who has now been diagnosed with Ebola. 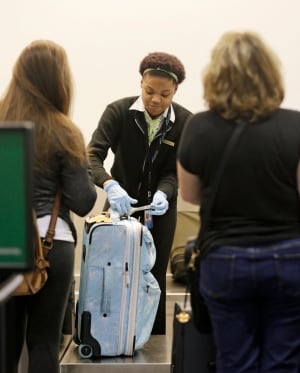 A Frontier Airlines employee wears gloves as she checks in passengers at Cleveland Hopkins International Airport on Oct. 15. Since a nurse who flew on its Dallas flight got sick with Ebola, all Frontier employees are wearing gloves. (Tony Dejak/Associated Press)

The airline involved in that flight, Frontier Airlines, has all of its employees, from ticket agents to baggage handlers wearing gloves.

Frontier Airlines has since taken the Airbus A320 that the sick nurse flew on out of service. The airline replaced air filters, some of the seat covers and carpeting on the plane, directing employees working on the cleanup to don masks and gloves.

Health officials are now monitoring other passengers who may have travelled with her.

Passengers boarding flights in the U.S. today could be seen carrying medical masks and wearing gloves.

The virus cannot be spread through the air circulation system of an airplane as it is not airborne. It can be spread by contact with bodily fluids of an infected person.

But airline stocks were driven lower this week amid worry that passengers may avoid flying because of Ebola.

The International Air Transport Association has issued no special guidance to its airline members for containing the potential spread of the disease in airplanes, but airline employees throughout the world are asking questions about their own safety.

In a statement today, the Association of Flight Attendants called for more measures to protect airline employees.

“We’re working with management to make sure our members have the tools we need,” said Corey Caldwell, spokeswoman for the AFA.

She said each airline is slightly different in its policies, but an increasing number of the dozens of U.S. airlines are permitting gloves.

The AFA published a list today of tools it believes its members need to protect against the virus, including the provision of gloves and masks for every flight attendant, airsick bags for every passenger and equipment to take the temperature of passengers who may become ill.

Among U.S. airlines, only Delta flew to Ebola-affected areas in Africa and it cancelled its run to Liberia in August.

Brussels Airways reaffirmed today that it would continue service to fly to Liberia, Sierra Leone and Guinea, where the virus has been most damaging, saying it would worsen the crisis if it stopped flying in humanitarian supplies.

“We’re not a humanitarian organization but for us to stop flying there would have to be a significant change in the risk pattern,” said Bernard Gustin, CEO of Brussel Airways. “Disconnecting completely from the rest of the planet would make the problem even bigger.”

Everyone who boards a flight in the region is screened for the disease and Brussels Airlines air crews have the right to bar anyone from a flight, he said. Airport staff in the region are equipped with gloves and anti-bacterial gel.

Airports such as London’s busy Heathrow are also screening passengers as they enter the country.

Air France has trained its flight attendants in procedures for a passenger who becomes ill during a flight, in line with recommendations from the World Health Organization.

The passenger would be isolated, given a face mask and directed to use a separate washroom. Flight attendants must don gloves, use disinfectant gel, store waste in containers and make enquiries about other passengers who the person may have come into contact with.