Statistics Canada reported Friday that the jobless number dropped by 0.2 percentage points to 6.8 per cent.

Most of Canada’s gains in September came in Ontario, Alberta, Saskatchewan and Newfoundland and Labrador. The rest of the provinces were largely unchanged.

Many of the new jobs — more than 69,000 — were full-time positions, with the construction, natural resources, 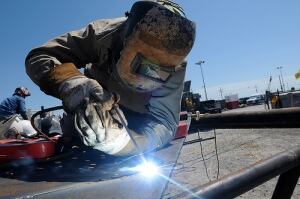 September’s figure is the biggest monthly jobs gain this year, but some economists wonder if the wobbly global economy could derail what looks like encouraging signs in Canada.

“As a stand-alone report, this is no doubt highly impressive, but given the rising turmoil in the rest of the world, not to mention growing questions over the reliability of the jobs data, these results may not have much lasting impact,” BMO economist Doug Porter said in a note to clients.

And at least one market watcher couldn’t help but notice that the strong month offsets a sudden decline in numbers the month before.

“All that happened here was that the record 98,000 plunge in private payroll employees in August reversed higher by 130k in September,” Scotiabank said, adding that the record number of self-employed seen in August, (up by 87,000) turned around and got wiped out in September, losing almost 56,000 positions.